It’s possibly the best reference to gin ever and one of the most memorable lines in movie history. Rick (Humphrey Bogart) sits filling glass after glass, alone in his bar in the wee sma’ hours. Sam the piano player is trying in vain to get him to stop and go to bed, but there are too many things on his mind. He mumbles: “Of all the gin joints in all the towns, in all the world, she walks into mine…”

Gin still has that cachet of being clandestine, hovering outside the law, and a hidden pleasure to be sampled like forbidden fruit. This is despite its history being accurately traced back to the 9th Century medical school at Salerno in Italy which was founded by Benedictine monks.

Gin has gone into and out of fashion countless times since, and it is going through another huge revival.

Vicki Ramsay Hammond’s degree in chemistry has come in handy for distilling gin at the award-winning pub, Number Twenty 2 in Darlington. Taking up a corner of the pub’s microbrewery is a small copper still which uses the mash for making beer to convert into alcohol – and gins with the ability to take the breath away.

The first batch of gin that bar manager Vicki produced contained 22 botanicals, for obvious reasons. This was a spirit to savour on its own without going near a mixer, a slice of lemon or ice.

“There were quite a lot of herbs in it,” she says. “I used rosemary and thyme and some pomegranate along with the usual botanicals. The second batch we made was completely different using lemon, thyme and rose which was brilliant.”

This is small batch distilling, as in tiny batch, with only four bottles coming off the first production, 18 in the second and nine for the third batch which was autumn fruit based with ripe apple and plum to the fore.

Vicki says: “Many distilleries buy vodka in then add flavours, but we make everything from scratch, so it’s very difficult to produce large amounts at a time. We’re also doing it differently every time, such as the first one when we steeped everything in pure alcohol for 48 hours before putting it through the still. It’s good making gin in such small batches because we can play around with it. We’re making improvements as we go. I’ve also learned a lot about making beer from working in the microbrewery.

“The gin has gone down really well with the pub’s customers – one of them wanted to buy the first four bottles but so far we just want to sell it over the bar (Vicki kept number one though). Another thought it was the worst thing he’d ever tasted.

“People like the idea of the batches and bottles being numbered. One customer wants to buy the seventh bottle from the seventh batch – 007 007.”

Vicki recommends Fever Tree tonics as mixers but reveals Number Twenty 2 actually makes its own, “following the tonic principle but with cucumber and basil”.

Meanwhile in Newcastle, a new venture called The Newcastle Gin Company was set up earlier this year by Durham Distillery and North East leisure company Vaulkhard Group at Bealim House (formerly Fluid Bar) in the city’s Gallowgate. A 400-litre, custom-built copper gin still – one of the largest in the country – has been installed behind bullet-proof glass on the ground floor of the multi-storey venue.

Durham Distillery is based in Langley Park on the outskirts of Durham City. Its pride and joy is Lily, a handmade, 400-litre copper pot still. All stills have to have a name or a reference mark registered with HMRC – Lily was born in Portugal with the number 7713. The still has a gin basket, which holds some of the botanicals, and a worm tub – a traditional cooling system which turns the vapour into gin.

It’s powered by a steam generator which heats the mix of botanicals, the alcohol and spring water, producing 200 litres at a time with each batch taking several days to make.

Elsewhere, Whitbarrow Nature Reserve near Kendal in Cumbria is one of only a few places in England with abundant natural regeneration of juniper, so what better place to source the prized berries for The Lakes Distillery’s recent annual juniper foraging day. The Lakes Distillery (which has its head office in Gosforth, Newcastle) has permission to use wild Cumbrian juniper in the production of gin, thanks to its close relationship with Cumbria Wildlife Trust, one of the distillery’s local charity partners.

As well as juniper, of the 14 in total botanicals, there are six found locally which include meadowsweet from Dubwath Silver Meadows – just a mile from the distillery – as well as local bilberry, heather, hawthorn and mint.

Sunderland-based Poetic License Independent Small Batch Distillery launched its range of craft spirits into the market at London’s Boutique Bar Show in September to an enthusiastic reception from gin experts. The distillery is based within the Poetic License bar, owned by Tavistock Leisure which opened in March 2015 near Roker Pier. Its 500-litre pot still, Gracie, is situated in full view of customers.

Poetic Licence’s three launch products have been in development since the turn of the year to perfect the recipes; Northern Dry Gin (43.2% abv), Old Tom Gin (41.6% abv) and Graceful Vodka at 40.4% abv. Northern Dry Gin is a regional twist with a big kick of juniper as well as some more contemporary additions, such as green cardamom and Persian lime for powerful floral and citrus flavours. In contrast, Old Tom Gin is aged with oak and its sweeter style is achieved entirely with botanicals such as hibiscus and rose which also impart colour to give the spirit a rose-gold tinge. Graceful Vodka gained its name from its glorious smoothness.

As for the Poetic License name, Mark Hird, managing director of Tavistock Hospitality, says: “Poetic License stems from the want to do things differently. Being independent, we have the freedom deviate from conventional rules, often resulting in something a bit weird and a bit wonderful, but that’s the joy of it.”

As Sam the piano player in Rick’s Bar sang: “The fundamental things apply, as time goes by.” 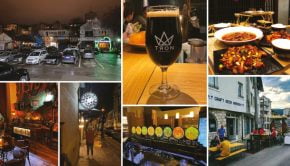 Get away with you →

One Response to The tonic that’s gin