A small pub is fulfilling all expectations, writes Alastair Gilmour

The large monochrome photograph on the back wall of the Box Wood Tap sets the tone of the Bedlington, Northumberland, pub. A Bedlington terrier wearing a cloth cap and sitting in front of a pit wheel is irreverent and amusing; it has a local focus, and while it doesn’t appear to take itself too seriously, it gives the impression of knowing what’s what.

The Box Wood Tap – a former beauty salon which moved to larger premises around the corner – has been open for 15 months and has settled into the vicinity as if it’s always been there.

“Things are really good and I’m really enjoying it,” says owner Ryan Haigh. “In fact the time has flown by, absolutely flown by.

“I hadn’t worked in a pub before – I was a manager at Nandos in Cramlington but started with them in Carlisle – but I did about six months for my mam at The Office in Morpeth.” (Ryan’s mother, Andrea Johnson, runs two micropubs, the regular award-winning The Office and the Fox’s Den in Felton, Northumberland.)

It was the shifts at The Office that convinced Ryan that this was the sort of thing he wanted to do. He says: “It was exciting and just sort of rolled from there. Customer service is the same as at Nandos but the mechanics of the cellar and the beer are different, but I soon got to learn all that.

“There’s quite a big demand from craft beer around here – I started off with six cask and six keg but wanted to change the cask more frequently so have gone down to four. It’s maybe less of a choice but it’s more turnover and customers seem to respond to that.”

The Box Wood Tap is, it’s fair to say, on the small side but good use is made of the space available.

“This is it, there’s no room to expand,” says Ryan, “but we’re going to adapt a few things, like putting a shipping container in the back yard to give us a second toilet and a bigger cellar.

“Custom is mainly from in and around Bedlington – around 80% – but when we get a new batch of Wylam products you get them from all over the place.

“We often get people saying they couldn’t get in the door. We can do 40 comfortably but have had 50 in. At that time it was easier for me to come out from behind the bar, out the front door and around to the back yard and into the cellar to change a cask. Monthly food nights are always at capacity – which could be pizza, Cuban food, Spud Gun, Acropolis Street Food or Good Times Tacos which are very, very popular.

“It’s mainly North East beers here – Rigg & Furrow are popular, as are Anarchy, Almasty, Great North Eastern Brewing Co and Box Social – and Double Maxim simply flies out. Customers just can’t get enough of that really traditional thing. The fastest seller we’ve had though is Two By Two IPA which sold out in four hours. But there’s a big keg demand for Tiny Rebel, Cloudwater and Wander Beyond.”

At one point, Ryan thought of using his shipping container idea to house a brewery – but he’d still be left with the problem of a small cellar and one toilet. The idea is still live, however, as his mate Dave Brown is apparently a brilliant home-brewer, so the pair have set up Sidekick Brewery and are looking locally for a unit.

The Box Wood tap is as dog-friendly as you’ll get anywhere – in fact, Ryan has two Bedlington terriers himself (“Geordie lams, they’re called”) and a photo on his phone of every dog that has come into the pub.

“I’m going to make some sort of montage out of them,” he says. “We’re filling a demand for people from the area – some people who have lived in Bedlington all their lives didn’t bother coming out until now.” 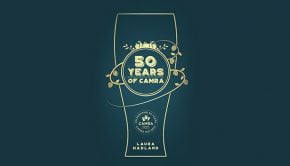